This adorable “helicopter” bun was one of several rabbits caught in Licking County during a joint rescue with another local rabbit organization. Named Echo because it “just seemed to fit” (more on that later!), his journey began as soon as OHRR volunteers on duty at the Adoption Center took a look at him. Before he was rescued, Echo was kept outdoors in an area with feral cats. He had been attacked and had wounds on several parts of his body, including missing a small part of his nose. 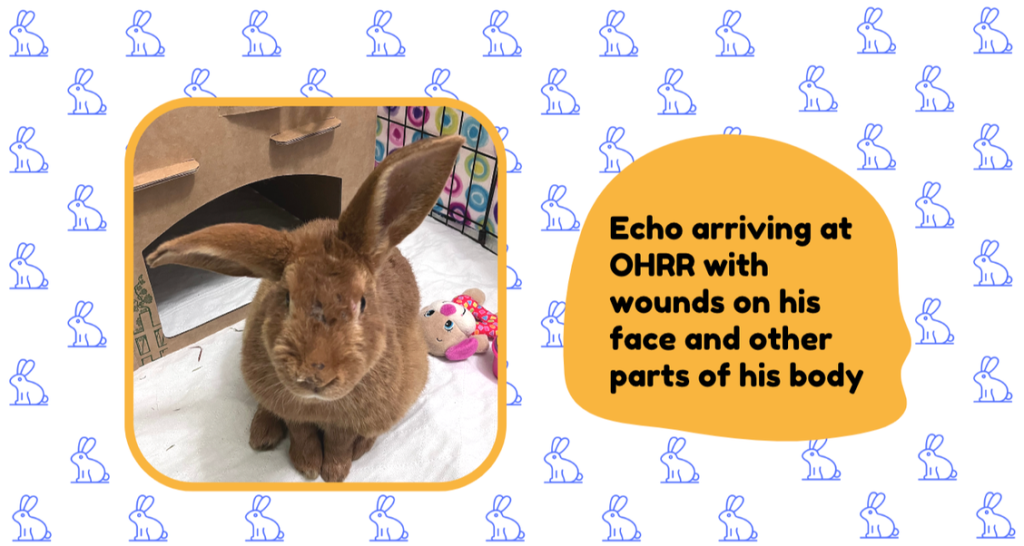 Even more concerning was an issue with his right front foot. It was inflamed and seemed to be bothering him quite a bit. The next day his wounds were tended to and he had surgery to remove an abscess on his foot. But after a few days, the infection came back. Over the next few weeks, we tried several treatment strategies, including repeated rounds of heavy-duty antibiotics, draining the abscess, wrapping the foot, and a toe amputation, but unfortunately, the infection persisted.

All this time, Echo was in the excellent care of OHRR medical foster parents, Courtney Parrill and Alan Guy, who were soaking his foot and giving him injections multiple times a day. When Courtney and Alan had to go out of town, Lindsay McPherson took over Echo’s treatment. During his follow-up surgery, Dr. Borders discovered an infected wrist bone – finally an answer! The removal of that bone did the trick – the infection was gone. 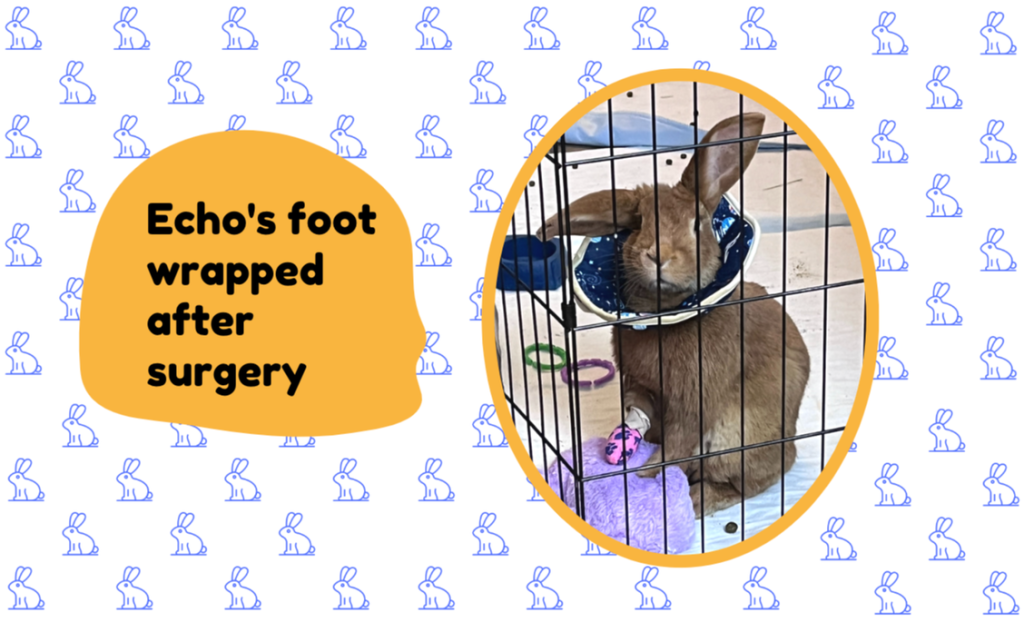 Echo was ready to come the OHRR Adoption Center and find his forever home!

Over the next month at the Center, Echo became a favorite with the volunteers. He had such a wonderful personality and always seemed to have a “smile” on his face.

Then, one Saturday, Echo did not come bounding over to eat his breakfast. This was bad! We are always concerned when a rabbit isn’t eating, but through all of his foot pain, meds, and surgeries, Echo had NEVER missed a meal!

From that one missed meal, events started to happen quickly for Echo. Here is how his story unfolded:

10/8 – Didn’t eat breakfast. Showing signs of stasis and discomfort. Dr. Susan Borders was at the Center for a vaccine clinic and evaluated him. Gave fluids, meloxicam, Gas-X, cisapride.

10/10 – Echo was still not eating, so Bev May, OHRR Lead Volunteer, took him to Pataskala for a re-exam by Dr. Borders. Results from lab tests that day made her concerned for possible liver lobe torsion, so, she referred to MedVet for emergency evaluation. When Bev arrived back at the Center and learned of the referral, she immediately headed back to Pataskala to transport Echo to MedVet Hilliard.

MedVet thinks it is liver failure NOT liver lobe torsion – fortunately, Drs. Jew and Oglesbee are available for consult and care. OHRR has a decision to make. Dr. Jew wants to do surgery to take a liver biopsy to see if there is an infection, which if it can be treated, could reverse the liver failure. But, can Echo survive the surgery in his weakened condition? We decide to take a chance and do the surgery if it means we can save Echo.

Everyone at OHRR is very worried about Echo. Several OHRR volunteers, including Lindsay and Courtney, visit Echo at MedVet to give him some special attention.

10/11 – Dr. Jew does surgery to obtain a biopsy of his liver. During the surgery Dr. Jew found that Echo’s stomach had rotated in an abnormal position (Gastric Dilation and Volvulus) that was causing an obstruction from his stomach to his small intestine. This condition had never before been documented in rabbits and was very likely what had been causing Echo’s digestive problems. His stomach contents were also severely dehydrated and smelled foul. Dr. Jew carefully de-rotated his stomach back into the proper position. He also made an incision in the stomach and emptied the rancid contents. Would that be enough to save Echo? We were all on pins and needles waiting to see if Echo would be OK. 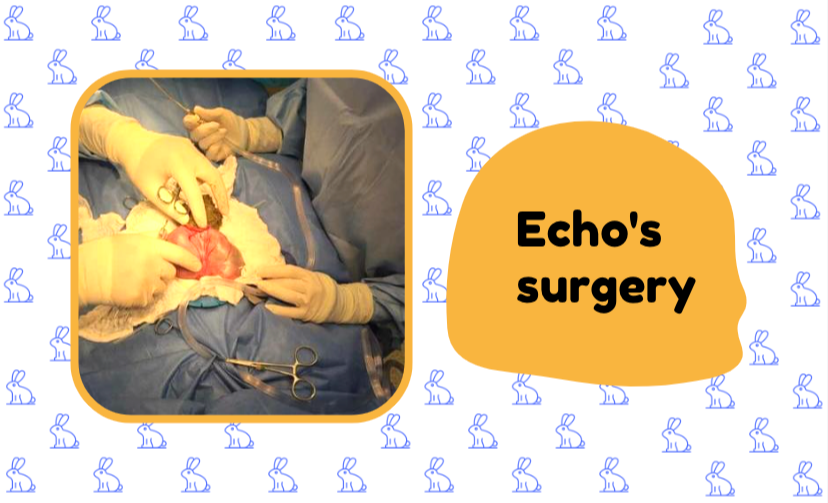 10/12 – Echo has survived the surgery and is starting to eat and produce poops – we are definitely believing in miracles!

10/13 – Echo is discharged from MedVet! Back to Courtney and Alan’s on on 8 medications. He started eating 100% like normal once home.

10/20 – One week after discharge, Echo had a visit with Dr. Borders for blood work and an exam. Blood work NORMAL. Liver levels NORMAL. No repeat blood work if no other concerns. It must have been Echo’s rotated stomach that was causing the problems. 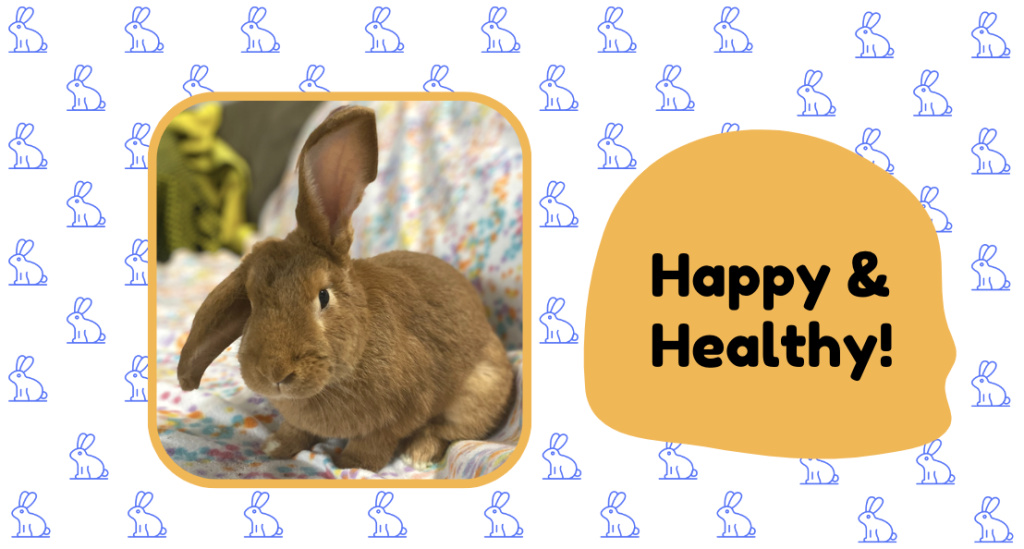 11/7 – All medications are finished. Echo is cleared to return to the Center for adoption!

This is a very happy ending to Echo’s story. He is headed back to the OHRR Adoption Center hoping to find his forever home. His name, Echo, may have turned out to be prophetic, as he rebounded again and again just like an echo.

Echo and OHRR will never forget his remarkable journey. We are thankful every day for his health and the wonderful group of exotics veterinarians who take such good care of our rescue rabbits! 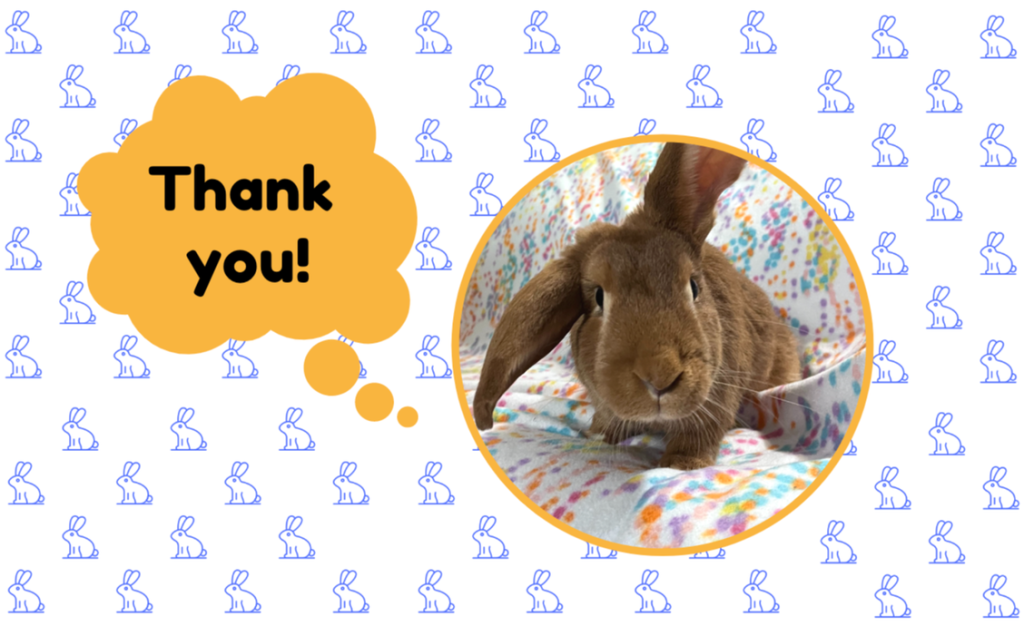 Thank you for giving to the OHRR Vet Care Fund. We can continue to help rabbits like Echo because of you!

Click on any image of Echo or the “Donate Today” button below to go straight to our donation page.